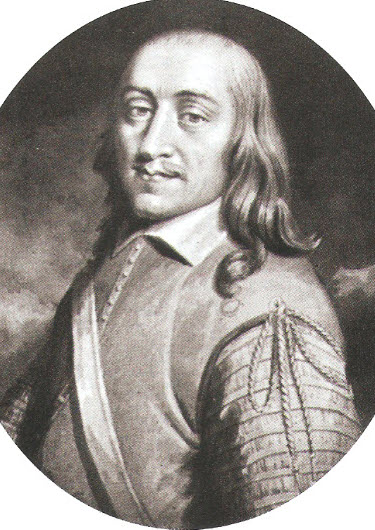 I should start by saying that the picture worries me. Rainsborough is described as a tall, powerfully-built man and we can see by his dates that he was only 38 when he died. So can this portrait really be him? I’d imagined him as being dark, dynamic and a little fierce. Instead, he looks calm and cuddly – rather like a favourite uncle. Ah well.

Rainsborough’s family had connections with New England – in fact, two of his sisters married Winthrops of Massachusetts. Thomas himself was brought up to follow in his father’s footsteps and become a sailor. After the onset of the Civil War, he served as Vice-Admiral for a while in 1643 but was then commissioned as a Colonel and spent the remainder of the war serving Parliament on land.

He became known for stern discipline, skill at breaking sieges and ferocity towards the enemy. He commanded a regiment in the New Model, fought at Langport, Naseby, Bridgewater and Bristol – where, on taking Prior’s Hill Fort, he put every man inside it to the sword.

But Rainsborough’s interest for us today lies less in his military career than in his part in the Putney Debates of 1647. [See Garland of Straw] He was the only field officer in sympathy with the views of John Lilburne and the Levellers. He opposed continued negotiation with the King aimed at reconciliation and demanded a new constitution with an extended franchise and political equality. Basically, he argued the case for ‘one man, one vote’. Since, at that time, only landowners had the right to vote this radical idea found immense favour amongst the comon soldiers and none at all amongst Rainsborough’s fellow officers.

His most-often-quoted and therefore most famous speech included these words:-
I think that the poorest he that is in England hath a life to live as the greatest he; and therefore, truly, I think it’s clear that every man that is to live under a government ought first by his own consent to put himself under that government.
Nicely-put and perfectly true – but a cause of huge disagreement in the Debates. Frequently hot-tempered, Rainsborough at one point became so incensed with Cromwell that he shouted, ‘One of us must not live!’ The quarrel was smoothed over but it is unlikely that they ever became bosom friends.

At the start of the second Civil War, Rainsborough was again appointed Admiral of the fleet – probably in order to remove his dissenting presence from the Army Council. Unfortunately, his Leveller views were unpopular with the Navy which mutinied and refused to let him board his ship. Back to fighting on land, he was sent to help break the siege of Colchester – where he was responsible for the summary executions of Lucas and Lisle.
His next posting in the autumn of 1648 was another siege – this time at Pontefract where the Cavaliers had been holding out since the early summer. A quartet of Royalists attempted to kidnap him from his quarters in Doncaster but the attempt went awry and Rainsborough was killed.
His funeral at Wapping was attended by some three thousand Levellers wearing sea-green ribbons in his memory; and the younger radicals, to whom Rainsborough was a great hero, called him ‘the just, the valiant and the true’.

Thomas Rainsborough’s voice is not the most well-known – though I’ve seen numerous references to him just recently – but it is a powerful one.