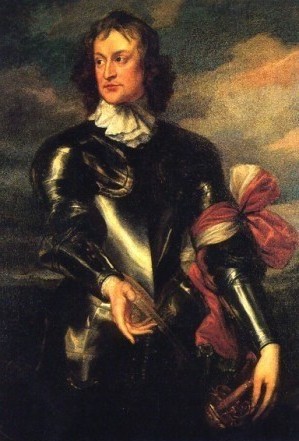 Lambert was born the same year as Rupert of the Rhine and, like Rupert, would have been just twenty-three years old when the Civil War began. I’ve always had a sneaking fondness for him – which anyone who has read Garland of Straw, where he features as Gabriel’s superior officer, will already know. Needless to say, he’ll be back in The King’s Falcon – this time as Eden’s commander between Scotland and Worcester.

Some of the Roundheads – such as Cromwell, for example – who were leading players in the conflict were born around the turn of the seventeenth century and didn’t achieve prominence until they were well into their forties. Others, like Ireton and Lilburne, died before reaching that age. By the time John Lambert was forty, he had achieved everything and lost it all … and he spent his remaining years in prison.
How did that come about?

Lambert was born in West Yorkshire.  He began his military career as a Captain in Fairfax’s cavalry and was a Major-General by the young age of twenty-eight – a swift rise which reflects his strategic brilliance.  He fought at Marston Moor in 1644, Preston in 1648, Dunbar in 1650 and played a vital role in the victory at Worcester in 1651. He was popular with his own men and the Cavaliers disliked him less than most of the other Roundhead leaders – probably because he was less Puritanical. He kept his religious views to himself, was a cynical realist and combined ambition with a gift for intrigue.  He lived in style with his wife, Frances, at Wimbledon House where his hobby was cultivating tulips – on which he spent a great deal of money.

Having covered it in detail in Garland, I’ll pass over Lambert’s involvement in the complex politics of 1647-49 and simply say that he had no sympathy at all with the radicals and wasn’t one of the regicides. But in 1653, he engineered the dissolution of the Barebones’ Assembly and produced the first draft of a document which led to the establishment of the Protectorate. This is interesting because I get the impression that he didn’t particularly like Cromwell – and Cromwell clearly didn’t understand Lambert at all, describing him as ‘bottomless’. Certainly Lambert opposed the move to make Cromwell king or the Protectorate hereditary – a stand which led to his dismissal.

In May 1659, after the death of Cromwell and the overthrow of his son, Richard, Lambert regained his previous military commands when the Rump was recalled.
But this is where everything seems to have gone awry.

Following [yet another] quarrel between Parliament and the Army, Lambert repeated history by expelling the Rump. This drew General Monck down from Scotland to restore civil authority and – inexplicably, to me at least – Lambert’s troops deserted him rather than fight. The result was that he was captured and put in the Tower. He escaped, tried to rally the Army in a last ditch attempt to prevent the Restoration – and was recaptured. In 1662, he was tried, condemned to death, reprieved and sentenced to life imprisonment. He spent his remaining twenty-two years as a captive – first on Guernsey and then on Drake’s Island in Plymouth Sound.

Perhaps Lambert’s tragedy was that he reached his peak too soon and couldn’t accept that his meteoric rise might come to an abrupt end. It’s true to say that, if he had been less ambitious, he might not have begun the troubles of 1659 which resulted in the Restoration; but equally, if his principles had been of the more flexible kind, he might have gained further honours by betraying his friends and throwing in his lot with Charles the Second.

At the end, Lambert plainly did what he’d always done – he stuck to his guns. And for two decades, the intelligence and courage of a natural leader were utterly wasted.

In the words of one of the great Cavalier heroes, horribly murdered nine years before the return of the King …
He either fears his fate too much or his deserts are small,
Who puts it not unto the touch, to win or lose it all.
James Graham, Marquis of Montrose